Share a memory
Obituary & Services
Tribute Wall
Read more about the life story of Byron and share your memory.

Command Sergeant Major (CSM) Byron James Barron, US Army Retired, 59, passed away Wednesday, March 4, 2020 from complications of Amyotrophic Lateral Sclerosis (ALS) at his home in Dahlonega, Georgia. He fought valiantly against a terrible illness that never stole his love for life or altered his love for our great nation.

His story begins in Munich, Germany, where he was born on May 17, 1960 the youngest child and only son of James and Nancy (Strawser) Barron while his father served as an officer in the US Army. After many Army moves, he graduated from Frankfurt American High School (Germany) and not long after  joined the Army as an Airborne Infantryman in 1981. His military career as an Airborne Ranger matched his traits and personality: resilient, fearless, adaptable, dedicated, confident, industrious, selfless, fiercely independent and loyal: ARMY STRONG!

During his long and distinguished career Byron served as a Paratrooper, Scout Team Leader, Squad Leader, Operations NCO, Platoon Sergeant, Drill Sergeant, First Sergeant, Command Sergeant Major, and ROTC instructor. While stationed in Italy, he met and married Marina, the love of his life. As a Staff Sergeant, he was selected as the "NCO of the Year” for the Airborne Combat Team, Southern European Task Force, and United States Army, Europe (USAREUR), and was later inducted into the prestigious Sergeant Morales Club, which recognizes the highest ideals of integrity, professionalism and leadership for enlisted service members serving in Europe.

CSM Barron completed Ranger School, one of the Army's toughest courses, where he earned the coveted Ranger Badge. He also competed in the grueling Best Ranger Competition earning 6th place overall. Among other assignments he was a Drill Sergeant for the Infantry Training Brigade, Fort Benning, Georgia; the First Sergeant, 501st Parachute Infantry Regiment, Anchorage, Alaska; and the Command Sergeant Major, 5th Ranger Training Battalion, Dahlonega, Georgia. For the last assignment of his military career, he was the Senior Army Instructor at North Georgia College and State University working with the Faculty and Corp of Cadets to help develop future officers of the United States Army. He retired from the Army in 2007 having shaped and molded a generation of soldiers and future Army Officers. His legacy of leadership, charisma, passion, sense of humor and wit will never be forgotten.

As he strongly believed in fostering youth development, CSM Barron was instrumental in developing and establishing a Junior ROTC program in Lumpkin and White Counties to prepare high school students for leadership roles supporting a curriculum emphasizing citizenship, character and leadership development, and community service; all values he loved. He was also the Scoutmaster for Boy Scout Troop 36 in Dahlonega.

After his retirement from the US Army, Byron purchased a business: CertaPro Painters where, through hard work, unflagging energy, and entrepreneurial spirit he developed and grew a successful business. As a business owner, he served on the Board of the Dahlonega-Lumpkin County Chamber of Commerce where he shared his expertise, leadership and knowledge.

His family will always remember Byron as a devoted and loving husband, father, son, brother, uncle, cousin, teacher, mentor, scout leader, Airborne Ranger, ROTC professor and a dear friend to many. He, with great compassion, energy and drive. He knew how to love and take care of people. He gave much of himself to others, always willing to offer a helping hand.

CSM Barron left an indelible impression on everyone he met. He inspired and led with great integrity and passion. He never gave up on his soldiers or friends. As he often said: “All leaders wear a rank, but true leaders wear the respect of their men." CSM Barron earned this respect.

Byron is predeceased by his grandparents Byron and Bernice Barron; Lawrence and Gladys Sill; James Strawser; and his father in law Aldo Dalla Libera.

The family is extremely grateful for all the love, support and solidarity provided by many friends, relatives and all of his Ranger buddies throughout his struggle with ALS.

Interment with Military Honors is scheduled for Friday, March 20 at 9 AM at the Georgia National Cemetery in Canton, Georgia. Following the interment, a Memorial Service will be held in the Chapel of  Dahlonega Funeral Home visitation from 2-3 PM and the Memorial Service from 3-4 PM.

In lieu of flowers the family requests contributions be made in his memory to the University of North Georgia Corp of Cadets Fund, c/o UNG Foundation, P.O. Box 1599, Dahlonega, GA 30533, and online at the charity link below - please select the "in honor/memory of someone special” option and type in CSM Byron Barron 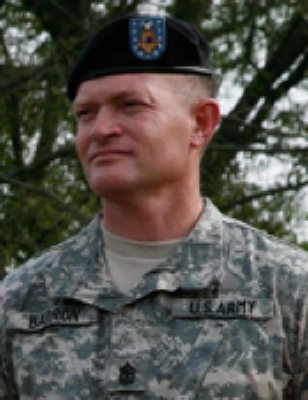